Since moving to Git, I'm loving the power. I feel safe. Once changes are committed, no matter what I do, I won't lose anything. And within reason I can later edit history to tell the story I want it to tell.

In our team, we use the commit messages from our master branch to automatically generate release notes. To achieve this the master commit history need to stay pretty clean. Ideally one commit per feature.

We therefore have been working on feature branches and squash merging them to master once they pass code review.

We use Atlassian Stash for code reviews. When a code review is accepted it does a merge to your destination branch. Stash doesn't do a squash merge, or use our commit comment, so we can't have it automatically commit to master. If we don't accept the review though, all we can do is leaves the code review open or marks it as abandoned.

To avoid this we make a review branch from master and review the feature onto that. Stash can then merge it once the review passes... so it's happy... then the developer manually squash merges the review branch to master, so we are happy.

This was working fine, until we needed a feature to branch from another feature mid development.

The downside of squash merges, is that the master doesn't know the changes came from a branch. This means :-


This is a real pain.

To get around this... we have started to use a common "integration" branch. (instead of the review branches)


This final merge is easy as the code is the same, and tells Git that these branches align at this point. This means that later "squash merges" onto master keep working without merge conflicts. Also any branches committed to "integration" retain all history, so they merge nicely too. 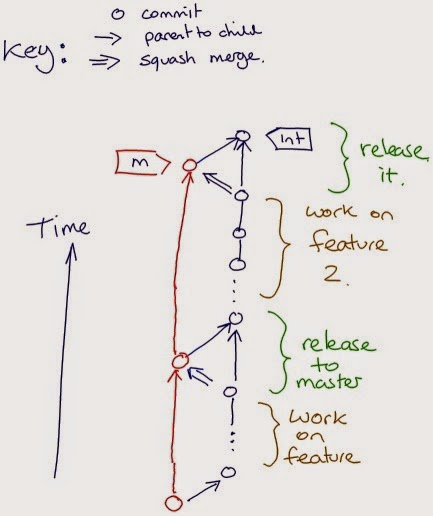 Happy Coding.
Posted by Nigel Thorne at 2:32 pm No comments:

I wrote an extension for Moq to assert that no methods are called on a mock object.

Moq is my favorite mocking framework for C#, but it's not perfect.

Test Spies remember interactions, so you can assert on them at the end of the test instead of setting up your expectations at the beginning of the test. Some people don't like this as your feedback comes after the faulty code has been executed, instead of being at the point the unexpected interaction occurs, so you don't have the same stack trace, What it does, however, is allow you to follow the Arrange, Act, Assert pattern for test construction. This in turn allows you to strictly limit the focus of your tests, making them less brittle and more intention revealing.

If you want to assert that no interactions occurred with an object, this standard way of doing this in Moq is to use a "strict" mock. A Strict mock will throw exceptions when a method you didn't explicitly set up is called.

Strict mode is set at object construction which is typically in your setup method, so can't be changed on a per test basis. This means all tests make this interaction implicit assertion even the ones where the focus of the test isn't on these interactions.

Even worse, say you "setup" some default behaviour for your Stub object, Now if you want to know that no methods are called on a specific test, then you have to explicitly "verify" each method individually to assert it's not called. This makes tests brittle. If you add a new method to the object you have to add that methods to any test that was asserting that no interactions occurred.

Extension Methods To the Rescue!


To help with this I have written an extension method to verify no methods are called on an object.

This useful, but is only a step in the right direction. Ideally you would be able to specify all the interactions you do want to occur, and finish by saying "and nothing else".

Posted by Nigel Thorne at 8:27 am No comments:

I was trying to get a Docker VM running on windows at work using the tutorial, but kept getting "Unable to connect to us.archive.ubuntu.com"... In my case it was the proxy server.. and I found a simple fix.

Ok this got me a bunch further... but not all the way.  Now the Guest Additions module is failing to install.

I was getting messages to say the virtualBox guest additions didn't match the version of virtualbox. So I upgraded VirtualBox. Then I got messages saying Vagrant didn't support that version of Virtualbox.

OK .. Another rookie mistake. I was running vagrant from the gem (v1.0.4). I've uninstalled the gem 'gem uninstall vagrant' and downloaded the msi. The MSI version is v1.4.3.